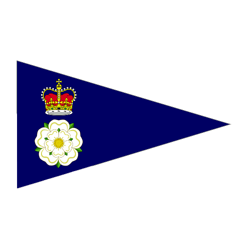 Jim Saltonstall (Former Senior National Racing Coach for the Royal Yachting Association. British Olympic Sailing Team Coach 1996 and 2000. M.B.E.) reports:
“Situated off the east coast of Yorkshire, Bridlington is perhaps the best bay for sailboat racing on the whole of the east coast of England. With easy access from the end of the M62, it can be reached from the south coast within five hours travelling time.
The Royal Yorkshire YC is situated above the western end of the harbour, renowned for its hospitality and social programs. There has been many an excellent evening on the premises in the past, and I am sure there will be in the future. The organisation for major events, both ashore and afloat, matches the hospitality – talked about for many years afterwards!”
Jim continues “There is also talk of a marina being built, which would turn Bridlington Bay into one of the best racing venues on the east coast. A holiday town, there is plenty of accommodation, camp and caravan sites, with pubs and restaurants in abundance – and the fish and chips are second to none. Bridlington is a great place to race – a badly under-used venue – find out for yourself! Race”